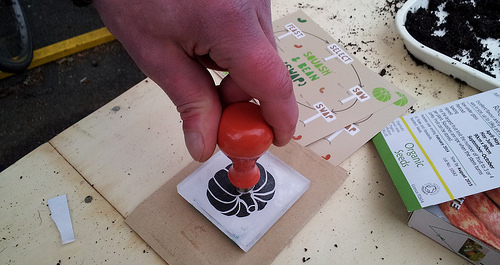 After piloting community cropping at the Bandstand Beds in 2012, 2013 got off to a fantastic start with the formation of The Bandstand Beds Association. Having a constituted body enabled us to receive funding and take the project to the next level.

I conceived a growing a project for the 2013 Chelsea Fringe, The Squash and Bean Swap. This built on the networking potential evident from the compost giveaways in 2012 as well as ideas around growing beans and pumpkins for winter storage, as

And on the Common itself we had a lot of fun sowing, growing and tending the beans and pumpkins which ramped away as they are designed to do. We developed the ‘hugel’ beds between the playground and toilets. We held many engagement events and chatted ever so much to Common goers in all their diversity! Our blog and flickr set tell the story in many pictures.

Some core volunteers remained and new arrived, in particular Diana who became treasurer and brought a wealth of experience in setting up the association, Emma who cycled to work past the beds each day, managed the watering rota of  many volunteers and brought such enthusiasm to all our events, and Camilla who produced graphic design that was just perfect. Later in the season David, Fiorella and Gill came on board and the cycle culminated in a very successful and enjoyable feast at Notre Dame Estate Hall sited on Clapham Common Southside.

An initial donation from Common contractor Judges helped us get started, Treasurer Diana secured an important grant for insurance that covered everything, we had some income from membership and Incredible Edible Lambeth paid for our amazing plant labels and some other Swap materials. We also received a small amount from Lambeth Council which supported the feasting event at Notre Dame Estate Hall. Diana’s Treasurer report can be found on this link (to come shortly).

For 2014 we have planted a blackcurrant farm at the hugel beds, now renamed the Spinney Beds, adjacent to the playground and Spinney kindergarten, thinking summer sunshine and vitamin C preserved as cordials, jam and fruit leathers. 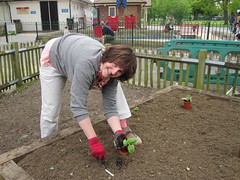 I have to say it is an astounding year of activity, and I am so pleased to see so much community engagement around growing food – the how to and the necessity.

I am standing down as chair as I go away on my travels and exploration.  This is after 30 years in Clapham and bringing up a family here – years that have included many of my own Clapham-grown crops, and visits to the Common.

I leave the project in the very capable hands of David Dandridge (Chair) Diana Linskey (Treasurer) and others, who have plans to seed the Bandstand Beds to local estates. I can’t wait to see how it unfolds.

You can continue to reach me through http://vivekagardens.com/contact/ and by tweeting @vivekagardens