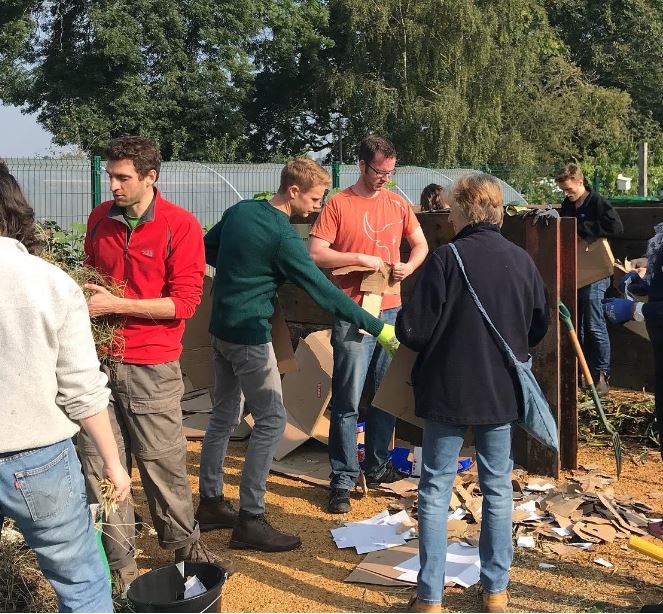 When we throw food waste away, it can be easy to not think about where it goes. Unlike the single-use plastic we’re all wary of, we know that organic waste will decompose. However, if put into landfill this waste will break down anaerobically, as the weight and compression of the other rubbish starves the decomposition process of oxygen. Why’s this a problem? This process releases methane, a greenhouse gas that’s 28 times more powerful than carbon dioxide at warming the earth. However, there’s a solution to disposing of this waste that doesn’t release greenhouse gasses and creates a nutrient rich soil conditioner in the process – composting.

The arrival of the composting bays at Bandstand Beds has been a long time coming. I’ve been volunteering at the garden for just over a year now and the week we found out we’d received Lottery funding for the bays was a celebratory one. They are an important part of consolidating and developing our garden. Allowing us to reach out to the community to help them understand the importance of composting and to learn about the process. We plan to share the compost we produce with the community.

It was great to have local MP Florence Eshalomi drop by to visit us at the garden on the morning of the bays opening, in recognition of what an important project this was.

To start the composting process, we welcomed along Dan Priddle from Social Landscapes, a London based organisation specialising in permaculture. In the hazy light of an October Saturday morning, a group of us huddled around a potting bench and listened as he enlightened us about why we compost and its ecological benefits.

He explained to us that despite actually being brown, in terms of composting coffee grounds were green and demystified what turning your compost really means. We asked questions and worked out the place our bays would have in Bandstand Bed’s future. When everyone agreed we knew what we were doing, it was time to – very literally – get our hands dirty.

It turns out, that when you build a compost heap, what looks like an unorganised mess actually follows a strict system. Our waste is split into Greens, that which is high in nitrogen, and Browns, that which is higher in carbon. In the first category is food waste, recently cut grass, fleshy green plant cuttings and tea bags. In the latter is dead leaves, woody cuttings and paper. These two types of garden waste are layered in 5-10cm thick sections, like some sort of compost lasagna. In the words of Dan: ‘We layer greens and browns, because where they meet, that’s where the action happens.’

because where they meet, that’s where the action happens.’

Starting with a brown layer, it soon became obvious our green material outnumbered the brown. This is often the case in a garden, especially at this time of year when the end of harvest means lots of plants are cut back. To bulk up the brown layers a fair number of our volunteers ripped up cardboard – picking off the plastic tape in the process.

To ensure that the decomposition of a compost heap happens correctly, it needs to be at least 1m3  in size, contain enough moisture – but not too much – and have enough air. With our large composting bays, we have size covered! For moisture, we watered each layer with the hose, and the first felt somewhat like spraying celebratory champagne. So it doesn’t get too wet, we covered the pile in tarpaulin once we were done. For air, that’s where the turning comes in. Once decomposition had properly started in the heap we’ll turn it to ensure aerobic, and not anaerobic breakdown occurs. Indeed, Dan gave us a cheat sheet so if the compost was too smelly, too wet, too cold, too dry, that we’d know what to do.

Satisfied that our pile was complete and full of knowledge that composting was a little more complicated than it might look, we sat down for a lunch of Tuscan bean soup. Using vegetables from the garden, it was the perfect way to end the morning as we digested what we’d learnt.

● Interested in learning about composting? We’ll be hosting more composting workshops in the future, let us know if you would like to take part by emailing ccbandsandbeds@gmail.com

Please note: Since installing our new composting bays BBA has received lots of email requests from people wanting to donate their food or garden waste. This is not something we are able to facilitate.