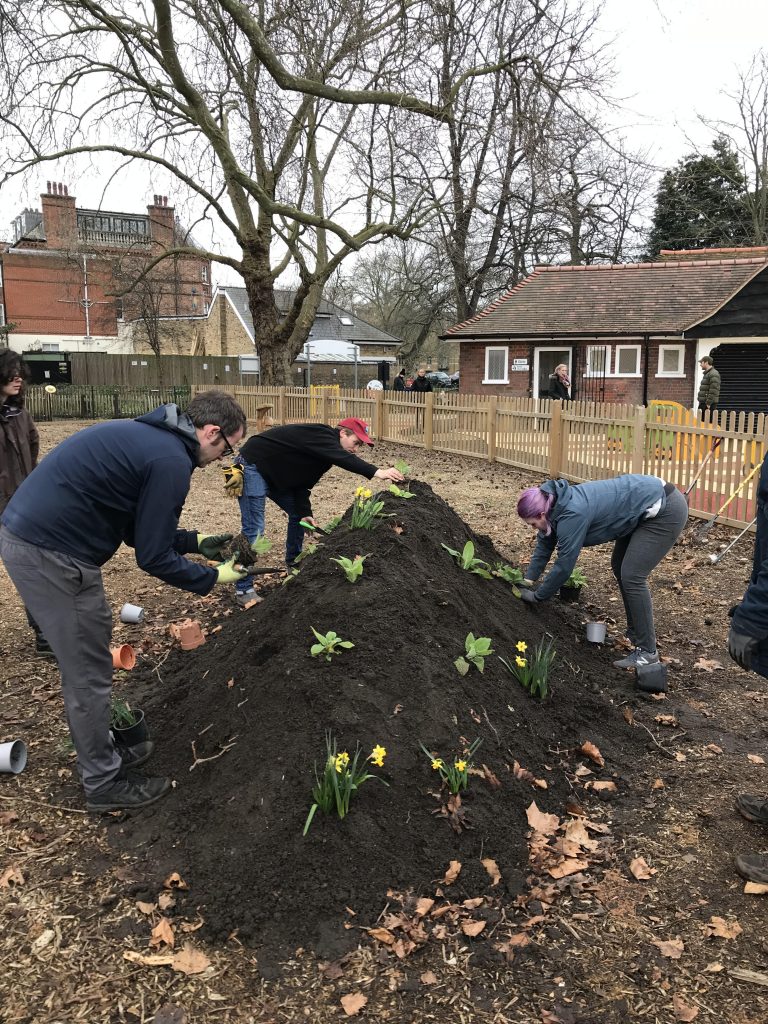 By the children’s playground on Clapham Common, near The Spinney, there are three large plane trees. In the last few years, the area beneath them has been covered in bark and designated for wildlife. As the bark breaks down into a growing medium and seeds blow in on the wind, the area is slowly springing into life. However, it’s not quite there yet, and here at Bandstand Beds we’re doing our bit to invite nature back in.

As part of this initiative, we’ve set up three hugelkultur beds in the space, two were made last year and one at the beginning of March 2022.

What is a hugelkultur bed?

A centuries old gardening technique that originated in Germany, hugelkultur quite literally means ‘mound’ or ‘hill culture’ in English. So it’s perhaps no surprise that the defining feature of these beds is their relatively large height and shape. To the unknowing eye, they look, just as their name suggests, like a mound of earth.

To achieve this height, they are made from layers of organic material – starting with large logs, before adding branches, twigs, leaves, straw and finally soil. This organic material will rot over time, essentially creating compost and nutrients in place. This is also the reason the original beds are built to such a height; the general decomposition of the material over time causes the bed to sink.

The top layer of soil, on both the sides and the top, is used as the growing medium. This can be used the same as any other bed to plant a wide range of food crops, flowers and ferns.

What’s so great about them?

As we’ve already mentioned, they create their own compost in place! The dense and varied plant matter in the bed leads to incredible fertile soil, with the nutrients being slowly released over time. The constant decomposition early on means the bed stays warm over the first few years of its life as well as having soil that’s ‘self-tiling’; as the matter breaks down, air pockets open up in the bed that stop the soil from becoming compacted. Also, the rotting logs hold onto moisture like a sponge, meaning beds need to be watered less frequently and experience less run off. Overall, this all means they need less intervention than your normal growing plot!

In addition to being low maintenance for the gardener, they’re great for wildlife. The logs and branches become ideal places for toads and frogs to hibernate over winter, and in general the decaying material makes a haven for a large variety of insects and bugs as well as different types of fungi. Being in a mound, they can support plants that like different levels of light – for example those who prefer the sun on the south side, and those who prefer the shade on the north. This leads to greater biodiversity and variety of plants.

Therefore, in an area like the new wildlife spot on the Common, they’re perfect for welcoming the biodiversity back in!

So, how did you go about making one?

Following the creation of the two last year, we were keen at BBA to create another this spring. This was at first looking unlikely, as we couldn’t source any suitable large logs. However, unfortunately when Storm Eunice hit London near the end of February, the Common saw some tree casualties in the high winds. Although it was sad to see the trees come down, we were pleased that Lambeth Council let us have some of the logs from the those that fell so that they could keep giving to the local environment as they broke down.

This meant, on a particularly cold morning in March, our hardy group of volunteers made their way to the wildlife area with wheelbarrows, plants and logs in tow. After inspecting last year’s beds and making some repairs (thank you foxes!), we started by mapping out roughly a 3m by 1m plan of where our bed should be.

We lay a base layer of soil before starting to stack the logs with the largest, and longest in the centre. On top of this we laid branches and twigs, many of which we found in the grounds of the wildlife area, with it being likely they too blew off in the storm. On top of this were piles of wet leaves – wet so they wouldn’t blow off – before we finished it off with a layer of soil.

After all of that hard work, which involved multiple trips backwards and forwards with heavy wheelbarrows, we got to the fun part. Using daffodils and foxgloves grown in the polytunnel back at our garden, we began planting up the mound. To add to this, we sprinkled a large variety of British wildflowers, all whilst keeping in mind the biodiversity benefits of each one.

Right now, and to an unknowing eye, our hugelkultur bed might look like a slightly unusual mound with a disparate selection of plants. But we finished the morning knowing our hard work had created another haven for wildlife on our common, that will soon be blooming with a range of flowers and plants. As we warmed our chilled fingers in the polytunnel, over cups of tea and bowls of bean soup, we chatted about what we hope they’ll look like in the coming year and what we should add to them next.

Our community garden is a wonderful place to learn and share gardening skills as well as meet and make friends. For more information about taking part at Bandstand Beds click on this link to our website, email ccbandstandbeds@gmail.com or stop by our produce table on Saturdays between 10am and midday to chat to one of our members.